“As a listed architect, I was careful not to falsify this building,” said Matthew La Piana, who runs his architecture business from the same building, during the interview.

“I don’t even have my own registration,” added La Piana, noting that he and his wife (they bought the building in 2019) decided to leave Thornhill’s Pharmacy’s popular neon sign.

Matthew La Piana is the architect and owner of Building Restoration Consultants Unlimited, while Lauri La Piana runs Lighthouse Court Reporting Inc. They have offices on the second floor while Sayville N Spice is on the first floor. 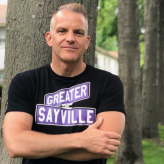 Brian Harmon, Former New York Press Association Writer of the Year, was a reporter and assistant editor for the New York Daily News and an award-winning journalist for the Detroit News. He began his career at The Record South in Sayville. He’s also appeared in 60 Minutes and Late Night with Jimmy Fallon.